A few months ago, we examined the shifting costs of higher education in Oregon and around the nation. While we love to geek out on data and analysis, we are limited in the way we present the information — namely with graphs and charts that come standard on Excel.

But check out this stunning visual representation of the crisis, as presented by The Week:

The chart shows, simply, that tuition is skyrocketing, debt is accumulating, and government assistance can’t keep up. In Sockeye‘s piece this fall, we dove deep into the why and found that tuition increases, in Oregon at least, was a result of disinvestment by the state.

The data is heart breaking. What’s a society to do, when learning and information comes at such great a cost?

** I have to include a footnote, as there is one piece of the infographic that I find misleading. The idea that unemployeed graduates is indicative of “getting less out of a college education” is deceptive. Unemployment has hit nearly every demographic. However, studies have shown that those who have college degrees are likely to recover faster and earn higher wages, once they do find employment, as compared to those who don’t have a degree. In other words,

“It is a tough job market for college graduates but far worse for those without a college education,” wrote Anthony Carnevale, director of [Georgetown University’ Center on Education and the Workforce.]

In fact, Oregon Economist Patrick Emerson tackled this same issue just last week, calling out the Oregonian for drawing similar conclusions. “By focusing on the individual debt burdens of college students you are telling a cautionary tale that might dissuade people from investing in college. This is a huge mistake. Investing in college is about the best investment you can make and pays off for the rest of your life,” he wrote and included the following graph: 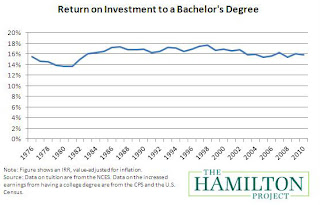