“The misinformation campaign is coming, but it does not have to succeed… [The November 2014 ballot measure, currently known as IP 9] proponents are expecting you to roll over and play dumb. We suggest you sit up and become informed.”

And with that, Oregonians have received one of the earliest warnings on this year’s ballot measure campaign from one of Oregon’s largest newspapers. The Statesman Journal published an editorial this weekend alerting Oregon voters about the November ballot measure that aims to undermine workers’ rights.

The measure the Statesman Journal is warning about would limit workers from joining together to fight for fair wages, benefits, and safe working conditions. It includes various anti-worker provisions that we’ve seen introduced in many states around the nation — from Wisconsin to Ohio and more. 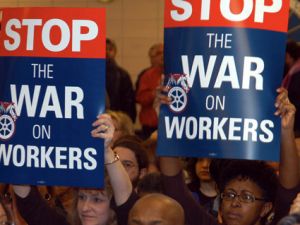 IP 9 is the same idea that Bill Sizemore has been pitching in Oregon for years. It’s being supported by Loren Parks, the single largest individual donor to right-wing causes in Oregon (even though he lives in Nevada.) And this current ballot measure was pitched and is being promoted by ALEC, the shady, back-room organization that gives lobbyists from large corporations unparalleled access to write and push bills that directly benefit their bottom line at the expense of middle-class families.

From the Statesman Journal:

Our sense is that it is almost as if a big red X has been affixed to a map of our state by outside influences who have decided in secret that we are to be the next target in their misinformation campaign. Chief among the groups is the American Legislative Exchange Council (ALEC), an unchecked conservative policy organization bent on convincing more states to enact right-to-work laws, using whatever-it-takes tactics.

Given the Statesman Journal‘s right-leaning tendencies (they, um, endorsed Mitt Romney), this shows just how extreme this type of anti-worker policy is.

If there are any questions about what this measure does, one only has to look at who’s behind it.  This measure aims to attack working Oregonians and middle class families, so that CEOs and corporations can continue to boost their profits on the backs of working people.

Want more information? A coalition of organizations and individuals have already formed to help Oregonians understand the truth about this measure. Hop over to the Keep Oregon Working site to learn more and get involved.